Mildmay Stud frequently have mares for sale privately and at public auction.

We regularly prepare mares for all UK breeding stock sales.

Please contact us if you are interested in any of our sales stock or if you would like us to prepare your mare for an upcoming sale. 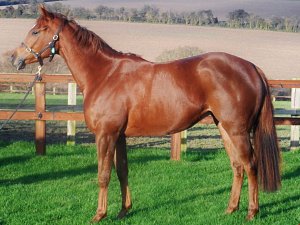 A good-natured individual with strength and size, Quite A Story is due to embark on a new career as a broodmare, which could be a very exciting proposition.

She performed superbly on the racecourse, winning twice and placing six times from not many starts. Those victories came over six furlongs and she displayed tenacity on both occasions.

Her sire, Equiano, was a dual Gr1-winning sprinter and is producing some great results at stud. The leading British sire of sprinters in 2016, his progeny include The Tin Man, hero of the Gr1 Qipco British Champions Sprint Stakes at Ascot last October. A good source of two-year-old winners, his progeny also progress well with racing.

This mare's dam, Perfect Story, was rated in the 90s during her racing career. As well as winning four times, she also placed in the Listed Kilvington Stakes. She has produced five winners including Perfect Cracker, a nine-time winner for trainer Clive Cox.

Quite A Story is currently in foal to Land Force.

A winner through and through, with a pedigree packed full of winners, especially on the dam's side, everything points to her being a success as a broodmare.

Located on the Hampshire downs, with easy access to the M3 and M4.